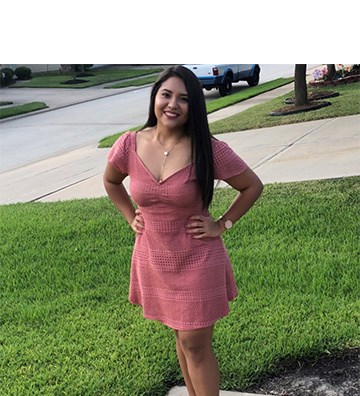 Hard work and determination had always been markers of Kimberly’s life but, without the support of her family, she was exhausted and in desperate need of hope. She was working three part-time jobs, taking seven classes at Houston Baptist University (HBU), trying to be the best mom she could for her 2-year-old little boy, Jayce … all while struggling to find support from anyone in her world. “I felt like I was doing everything I knew to create a better life for us and no one was on my team,” remembers Kimberly. She was truly climbing an uphill battle alone. Through tears, she would sit on the computer in the evenings and read stories of other women who had come to Gracewood. “I wanted so badly to be one of those stories. I wanted my story to be one of change. One that would make other women believe that they could do it, too.”

The start of her journey of hope began in 2014. In an act of faith and courage, Kimberly applied to Gracewood and was invited to come in for an interview. She was elated, but not without fear. She knew that this could change everything and, frankly, the idea of change was more anxiety-inducing than simply enduring the challenges she had grown accustomed to over the years. Kimberly completed her interview, waited a month, and then got the phone call she had hoped for. She and Jayce had been accepted into the program! She was going to be one of the stories she had spent those anxious nights reading about. Upon her arrival at Gracewood, she was still working three jobs and going to school. The staff at Gracewood saw the strain and stress this was putting on Kimberly and offered to provide financial support so that she could focus on school and being the best mom to Jayce.

They rallied around Kimberly and cared for her like no one in her life ever had. For the first time, she had help carrying her burdens. Through the supportive staff at Gracewood, she began to experience change and healing in areas of her life that had felt broken beyond repair.

Even with her newfound hope, the circumstances in Kimberly’s life were challenging. On Memorial Day 2014, Houston flooded and so did the first floor of the Gracewood campus where she was living. Her car was under water, her belongings were soaked, and she was not sure that she and Jayce could weather yet another storm in life. However, for the first time, Kimberly realized that she was not alone. Her community at Gracewood jumped into action. She and Jayce were quickly relocated to a hotel where they lived for a week until room was made for them at the Elmview campus. The other moms were so welcoming and made accommodations to ensure that her family had everything they needed once they got there. A generous donor even gifted her with a car, which allowed her the independence and stability to continue attending school.

As her faith continued to grow, Kimberly’s heart began to heal. She met with her counselor on a regular basis and, together, they worked through many of the emotional wounds that she had kept buried for years. The grace, healing, and redemption that Kimberly experienced set her free from the bondage of guilt and shame that she’d carried for so long. Slowly, she learned to trust others again and develop deep, meaningful relationships with the other Gracewood moms … many of which became lifelong friends.

During a time at Gracewood when Kimberly was without a vehicle, a member of the staff stepped in and offered help. She offered to drop Jayce off at daycare, drive Kimberly to school, pick her up after class, and then drive to pick up Jayce from daycare. Kimberly was floored by the kindness and generosity of such a gesture. “They dedicated their lives for our good. Their time, their donor resources, their emotional capacity. All of it. I had never experienced anything like that before,” Kimberly shared. She began attending Second Baptist church where she really began to understand the hope of the gospel. She knew that this was what her soul had been longing for. Through her study of scripture and the teaching of pastors, she came to a new understanding of her faith and the role that it played in her life.

After 18 months at Gracewood, Kimberly’s hard work and dedication paid off when she graduated from HBU. She finally had that bachelor’s degree she’d worked toward for so long! She accepted a teaching position and it wasn’t long before she’d saved enough money to rent her own apartment. She and Jayce were so excited to move into their new home!

Since their time at Gracewood, Kimberly and Jayce have continued to thrive. They are actively involved in their church and she is now working toward her master’s degree. Jayce is an energetic 7-year-old who loves swimming, practicing his Spanish, and playing with his friends. Kimberly was able to purchase her own home in 2018, which was a dream come true for her.

By the Lord’s grace, the support of Gracewood, and her hard work, Kimberly’s journey of hope really has become one of those beautiful stories she spent all of those nights reading about.