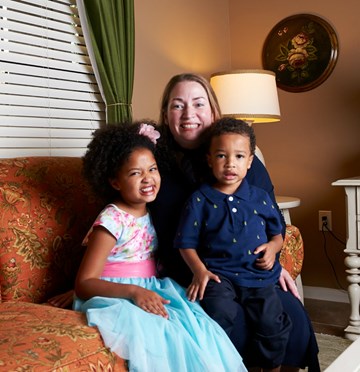 Angela remembers standing over the crib of her infant son as her husband screamed at her. After exhausting all efforts to save her seven-year marriage and put a stop to the increasing amounts of verbal, physical, and emotional abuse, Angela knew it was time to leave.

“I desperately wanted my children to have a father,” Angela explains. “But in that moment I knew that – in the long run – it was better for them if we left.”

Angela’s oldest son, John, was moving to Texas to go to college. Her aunt, who lived in Houston, offered her a place to stay while she figured out what was next for her and her family. So Angela packed up her children, left Ohio, and moved across the country.

But once she arrived, Angela couldn’t seem to pull it together. “I felt like I was expected to just get over it, but I was still grieving,” says Angela. “When you hear lies about how worthless you are for so long, after a while you start to believe those lies.”

Angela sought counseling and it was through that counselor that she was referred to Gracewood. “When I saw Gracewood for the first time, it was nothing like I pictured. It was so warm and welcoming. It felt like home,” she remembers.

In October of 2014, Angela moved to Gracewood with her daughter, Rejoice (5 years old), and her son, Joseph (17 months). “In one of my first sessions with my counselor at Gracewood, I remember her saying, ‘You deserve someone who is good to you,’” says Angela. “It was the first time in a long time that I actually heard and believed something that was true.”

Angela didn’t feel depressed – she never had trouble getting out of bed or making it through every day activities. But as she began to heal in an environment where she felt safe, she started to see things more clearly. “I had been walking around like a dead person. Now, I know what it feels like to be alive and to actually enjoy life again.”

Angela was working as a paraprofessional in a local school district, but she realized that she wasn’t making enough money to allow her family to become financially independent. She needed a long-term plan. She needed a degree.

With the help of Gracewood, Angela went back to school in September of 2015 while continuing to work part-time. In December of 2016, she will graduate with an associate’s degree and she plans to begin working on her bachelor’s degree at the University of Houston in January 2017. “It has always been my passion to counsel other women and their children and help them understand God’s best for their lives,” says Angela.

It’s not just Angela who has learned to thrive – her children have benefitted from life at Gracewood too! “The community support at Gracewood has been so good for them. Their best friends are right outside their door, ready to play,” exclaims Angela. “And having a house mom is like living with grandma or their favorite auntie, always ready to hand out hugs after a rough day.”

Angela admits that she still has plenty of doubts and feels overwhelmed when she starts thinking about the future, but then she hears God’s quiet assurances saying, I’ve brought you this far. Trust me with the rest.

“He’s teaching me gratitude,” says Angela. “I’m learning to be thankful for everything I have, instead of focusing on what I don’t have. When I thank Him daily for my room that I share with my children and my 16-year-old car that miraculously still runs, it makes a huge difference when it comes to loving my life.”

“If I’ve learned anything since coming to Gracewood, it’s that it’s God I’m trying to please, and nobody else. This is a truth I’m trying to instill in my children,” she says. “Because when everything else is stripped away, He is all that is left. And He is enough.”