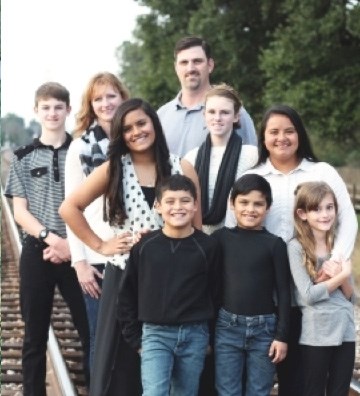 Chaos and crisis became the new “normal” for Jeremy and Vanessa Evermon when they returned from Colombia in September 2012 with their four newly adopted children. The three children at home who already called them “mom” and “dad” – Emily (13), Wesley (11), and Savannah (5) – were excited to have new siblings and welcomed them home with open arms.

However, they were unaware of the struggles that lied ahead, and just how much Gracewood’s Hope for Families program would do to stabilize the difficulties they faced.

The Evermons had been down the road of adoption before with their youngest daughter, Savannah, who they adopted domestically as an infant. However, nothing could have prepared them for the reality of moving from a family of five to a family of nine.

“We had no doubt that these were the children God had ordained for our family,” said Jeremy. “But bringing four extra children into your home who have different backgrounds, different culture, different personalities and different baggage is not easy.”

Jeremy and Vanessa thought that when Savannah’s adoption was finalized, their family would be complete. But when Savannah was just a toddler, Vanessa felt drawn to adoption once again. They began praying that God would make it clear to them if He had additional children who were meant to be part of their family.

“We didn’t know what God had for us, but we wanted to say yes to whatever it was,” said Vanessa. “He was slowly giving us one piece of the puzzle at a time.” In his faithfulness, God began showing Jeremy and Vanessa that their family wasn’t yet complete. He also revealed to them that they could love older children the same way they had loved their babies.

In 2011, the Evermons received an email about hosting some children from an orphanage in Colombia for three weeks during the summer and they agreed. Just a few months later, Katerin (13), Marian (11) and Omar (6) arrived at their doorstep.

“Because Vanessa and I speak Spanish, we were able to bond with them fairly quickly,” said Jeremy. “The first week, all of the kids were busy getting to know each other. The second week, they were friends, and by the third week, they were bickering like brothers and sisters.”

After their visit, the children returned to Colombia – but Jeremy and Vanessa’s world had been turned upside down. They had bonded so deeply with them and knew that these were the kids who God had meant for their family.

Jeremy and Vanessa began the process of adopting Katerin, Marian and Omar, as well as their youngest brother, Saimon (5), who hadn’t been able to make the initial trip. During the next year, they served as god parents to the kids while they were still in Colombia, mostly communicating through Skype and phone calls. It wasn’t long until the adoptions were finalized and they travelled to Colombia to bring their four kids home.

The Evermons’ home church in Houston, Fairfield Baptist Church, rallied around them when they returned. They surrounded them with love and support, brought meals, and even delivered extra things they might need like paper towels and toilet paper.

“We are so grateful for the love and help we received. But the truth of it was, few people really understood what we were dealing with,” said Jeremy. “Our ‘new’ children – although they were out of the orphanage and into a permanent family – still experienced loss from being taken out of their culture, away from their friends and biological relatives. Our ‘old’ children were dealing with sharing rooms, loss of attention and loss over their identity and place in the family.”

Meanwhile, Jeremy and Vanessa had struggles of their own: trying to figure out new family dynamics, a new budget, and their own loss of the picture perfect suburban family they had once envisioned.

“I remember that first year, I so desperately just wanted one good family photo of all of us together,” said Vanessa. “There were literally about four times we tried, and each time was a complete disaster.”

It wasn’t until their biological son, Wesley, began to struggle with anger and acting out that they realized the extent of their need for help. “He was grieving, but he just didn’t know how to verbalize it,” said Vanessa. “At that point, we knew we had to figure out how to parent differently. We were beginning to lose the hearts of our children.”

A fellow church member approached the Evermons to tell them about Gracewood’s Hope for Families program, offering family support and professional counseling at no cost due to the generosity of others who have funded the program. At Gracewood, the Evermons found a team of professionals who were dedicated to caring for children and families in distress. Through Trust-Based Relational Intervention (TBRI), Gracewood’s staff works with parents and children to help them learn healthy ways of interacting so that both are able to play a role in the healing process.

Soon, a Family Advocate from the Hope for Families program began visiting the Evermon’s home to meet with Wesley one-on-one and to encourage Jeremy and Vanessa. “While we had gone to much training and read many books prior to the adoption, we didn’t know how to apply what we’d learned to the faces and situations right in front of us,” said Vanessa. “Gracewood has allowed us to continue learning and given us hands on guidance.”

After a few sessions, Wesley was able to begin verbalizing his struggles and working through his anger. Jeremy and Vanessa have seen him begin returning to the sweet 11 year-old kid they know and love.

“It’s a long process to become family and we are not there yet,” said Jeremy. “But Gracewood’s Hope for Families program has helped us set realistic expectations and see that our responsibility is to create a safe place so our children can be who they are. We are slowly learning to be the parents these kids need even if it’s not picture perfect.”