Evidence of a Faithful God 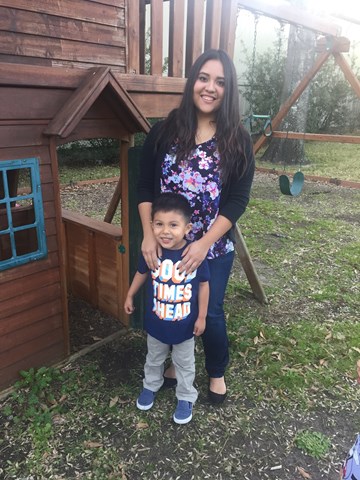 Kimberly graduated from high school with hopeful plans for the future. A native of North Carolina, she earned a college scholarship to attend the University of North Carolina and planned to pursue an undergraduate degree in psychology. When she found out she was pregnant during her second semester of school, her plans changed.

She married her high school sweetheart when she was eight months pregnant, and her son Jayce was born just two days before she would have begun her second year of college. Later that year, Kimberly moved to Houston with her new husband and infant son.

When Jayce turned 1, Kimberly began taking classes at Houston Baptist University (HBU). Being alone in a new city, she struggled to balance her roles as mother, wife, and student. She desperately tried to hold the pieces of their lives together but, without a solid support system, she had no one to help guide her. The demand of school put a strain on her relationship with her husband and, by the end of her first year at HBU, Kimberly knew that her marriage was over. For the first time, she was facing life on her own without the man that she had loved.

Still new to Houston, Kimberly didn’t know what she was going to do. She couldn’t imagine being able to finish school and parent her son, all while making ends meet. She didn’t know who to go to for help or where to turn. She was looking for a place to live when she found Gracewood online and applied to the program.

Kimberly moved into Gracewood’s Wanda Lane campus in August of 2014, just as Jayce turned 2 years old. That fall, she resumed her second year at HBU.

“It was a big change,” she says. Adjusting to a new way of life without the man she had been with for seven years was a struggle. However, after several months, Kimberly adapted to a new routine at Gracewood and appreciated the community that she found there.

She learned how to prioritize and structure her days. As Kimberly learned to implement a daily schedule for her family, she began to notice big changes in Jayce. He was more at ease. He was sleeping better. And she had more time to focus on being the kind of mom she wanted to be.

Kimberly had faced many obstacles before coming to Gracewood and, just nine months after moving in, she was confronted with another challenge when the Wanda Lane campus flooded. She lost almost everything and her family had to be relocated. But because of the stability and support they now had, she and Jayce were able to handle the transition with ease as they settled into their new home at the Elmview campus.

Kimberly continued her studies at HBU and graduated in December of 2015 with a degree in elementary education. Just a week after graduation, she began her new job as a fifth grade math teacher.

She has big hopes for the future, one day possibly returning to school to get her master’s degree. But for now, she is happy to begin her career and focus on being a great mom to her son. She knows that Jayce will reap tremendous benefits from growing up in a loving home. She looks forward to cooking him meals and walking with him through each season of his life – all the things that she wished she’d had as a child.

“If it wasn’t for Gracewood, I wouldn’t be done with school. I don’t know where I would be. I feel safe and secure, like this is dependable. And it was just perfect for me and Jayce,” she says. “Because of Gracewood, I can give Jayce the future that he deserves.”

To Kimberly and Jayce, Gracewood has been the tangible evidence of the faithfulness of our heavenly Father who provides everything that his children need.