An Aid to Success 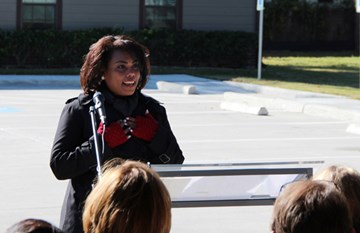 HomeAid Houston has been a long-term partner of Gracewood's, helping build three cottages at the ministry’s Spring Branch campus and remodeling Gracewood’s oldest Wanda Lane cottage, all at nearly half the cost.

But HomeAid has done more than erect buildings. It’s also helped rebuild lives, giving moms like Judith an opportunity to get back into the job market in a big way.

Last October, Judith was hired as the assistant to HomeAid’s executive director and worked as the organization’s bookkeeper. It was a major step for a once homeless mom and opened the door to even greater opportunities.

“HomeAid gave me a wonderful opportunity to get outside myself and get back into my career,” said Judith. “It’s so easy to let circumstances swallow you up and that could have easily happened to me if it wasn’t for this opportunity.”

Jobless and homeless, Judith and her two young girls came to Gracewood more than a year ago. Her ex-husband had run up thousands of dollars in credit card debt in her name, causing their home to be foreclosed on, and was arrested for withholding child support from a previous marriage, all without Judith’s knowledge.

“We were literally living in our car and Gracewood gave us a place to go,” said Judith.

After spending her first few months at Gracewood in shock over the circumstances that occurred, Judith mapped out a plan to begin providing for her children. She had an undergraduate degree in finance and a master’s degree in accounting, but needed a way to put those to work for her.

Using her knowledge and resources as a team leader and needing flexibility to be with her daughters, Judith bought a franchise began her own medical billing and coding business. However, with only two major clients, Judith still needed another source of income before she could become financially independent. It was then that Gracewood put her in touch with HomeAid.

“Everyone at Gracewood and HomeAid was so encouraging. They gave me confidence and reminded me that I was capable, intelligent and talented,” said Judith. “The opportunity with HomeAid allowed me to get back on my feet, recover and focus on my independence.”

While working at HomeAid, Judith was also taking a Skills for Living class through Gracewood, a class that required her to revamp her resume and cover letter as well as position her for a job opportunity that interested her.

Judith found an advertised CFO position with the University of Houston’s Alumni Association. She applied and was hired. “I never expected to even receive an interview, let alone to be hired,” said Judith. “But by the grace of God, that’s exactly what happened.”

Because of the healing Judith was able to receive at Gracewood as well as the career opportunity through HomeAid, she and her two daughters will be moving into their very own apartment. Judith started her new job as the Chief Financial Officer for University of Houston’s Alumni Association in June. She will also continue with her personal business and continue bookkeeping for HomeAid.

“Because of Gracewood, my girls didn’t even realize we were in crisis,” said Judith. “They understood that Gracewood was temporary, but the home environment allowed them to just be normal kids.”

“HomeAid’s generous partnership has allowed us to create a warm, nurturing environment that helps foster the growth and healing for transitioning mothers like Judith,” said Gracewood Executive Director, Debbie Rippstein. “We are so thankful that they have been able to see the fruit of their partnership first hand.”