An Academic Turn Around 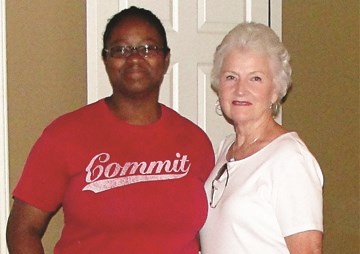 D’aja always excelled in school. But when her father left and her mother’s hours were cut at work, she went from a gifted and talented student to barely making her classes.

“She was constantly helping me with her younger brothers, working a part-time job, and simply did not have the opportunity to be a normal teenager,” said Danyell, D’aja’s mom.

When the lights of their apartment were finally turned off due to failure to pay their electric bill, Danyell broke down and called Gracewood. Danyell, 17-year-old D’aja, and Danyell’s three boys (ages 4, 3 and 1) moved into Gracewood in September of 2011.

“While I think it was hard for all of us in the beginning to relinquish control and accept help, the new environment gave D’aja the opportunity to think about herself and her own future, instead of simply worrying about her family all the time,” said Danyell.

Gracewood welcomed the Washingtons with open arms. Their new home gave D’aja the structure and privacy she needed to get back on track.

“Gracewood quickly became a second family to me. Everyone was so positive and encouraging, challenging me to achieve academic success,” said D’aja.

While going off to college was always part of D’aja’s plan, it seemed as if her recent struggles in school and her family being on the brink on homelessness had put a halt to those dreams until a Gracewood counselor recommended Blinn College in Brenham.

Following her high school graduation, D’aja spent her summer volunteering at Gracewood. After navigating the application process to Blinn, receiving acceptance, registering for classes, applying for housing and ordering books, D’aja had nothing left to do but pack.

“I always dreamed about sending my daughter off to college and decorating a dorm room that looked as if it was straight out of a JC Penney catalog, but given our financial state, that simply was not feasible,” said Danyell.

But, when the Current Missions Group from Champion Forest Baptist Church (CFBC) heard about D’aja, they wanted to make sure that she was all set up before she set off for Blinn.

After receiving a list of the bare necessities from D’aja as well as getting an idea of the colors and decorative style she liked, the women from Champion Forest went on a shopping spree.

“It was a privilege to spend time with D’aja. She is a very appreciative, humble, compassionate young lady whose love for Jesus is evident in her life,” said Betty Hollenshead, President of the Current Missions Group. “We will gladly continue to love on her and support her throughout the year as opportunity arises.”

The ladies from CFBC not only blessed D’aja with her wish list, but with more than she could possibly have asked. The items given to her included coordinated bedding, towels, a laptop, fan, mini-fridge, hygiene items, pajamas, slippers, laundry detergent and more.

“We filled our car to the brim,” said Danyell. “We had gone from wondering if D’aja would be able to go off to college at all to wondering how we were going to fit all of her stuff in the dorm.”

Thanks to Gracewood and its loving ministry partners, D’aja is off to a wonderful start for her first semester of college. She is currently taking her core classes, planning to get her associate degree from Blinn before moving on to complete her bachelor’s degree in either engineering or education.

“Gracewood has been a wonderful experience for me, giving me a stronger bond in Christ as well as the support of an extended family that encourages me to pursue the passions God has given me,” said D’aja.