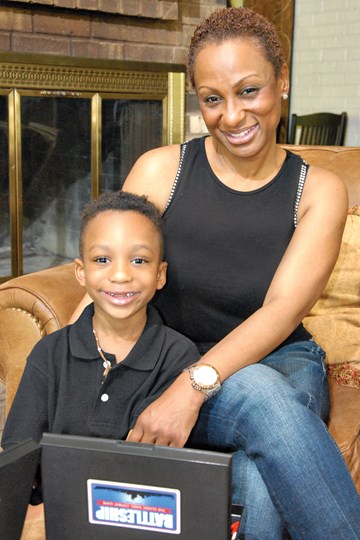 Anita and her 6-year-old son, Jayden, came to Gracewood under unique circumstances, even for a ministry that specializes in helping moms and children in difficult situations.

The move was life-changing for both of them.

After a prolonged dispute with a former employer that led to a lawsuit, Anita went eight months without a paycheck before the case was settled, depleting her savings and leaving her on the brink of homelessness.

As she was moving out of her apartment, Anita heard the annual “Grown-Up Christmas List” promotion on Houston’s contemporary Christian radio station, KSBJ. Feeling led to call in, Anita shared that her Christmas wish was to be adopted so that she and Jayden could have a short time of restoration to get back on their feet. Shortly afterward, Anita received a call from one of the DJs at the station, asking if she had ever heard of Gracewood.

If that wasn’t enough, Anita was referred to Gracewood two other times by the family she was renting a storage unit from and by the mother of a child at Jayden’s pre-school, who also happened to be a Gracewood mom.

“God is so merciful and so good. He was watching out for us and making himself known every step of the way,” said Anita.

When Anita and Jayden moved into Gracewood, Jayden quickly settled into what he called his “great home.” He even told his mother one day, "Mommy, look what God has given to us!"

Anita could not legally apply for or accept other job offers during the eight months in which her employment case was in review, but she did begin networking and seeking out possible future opportunities, both in Texas and in California, where she has grown daughters. She finally accepted a management job with a framing and arts supply company near Houston.

Anita’s six-month stay at Gracewood was shorter than most, but it will have a lifetime of impact.

“I will forever be eternally grateful to Gracewood and for this time of restoration,” said Anita. “I am fully committed to sharing with others about this wonderful ministry and all it has done for me.”

Executive Director Debbie Rippstein said that during her stay at Gracewood, Anita has been a tremendous asset to the ministry. She made some custom pillows for a sectional in the new Gracewood cottage, willingly opened her personal clothes closet to another mom who was going on a job interview, and has shared her testimony at Gracewood events.

“Anita has been such a blessing to both the staff and moms during her stay at Gracewood,” said Debbie. “She has done everything she can to volunteer and serve this ministry. It has been an absolute privilege to provide her with a place to heal.”